A day in the life of an Irish greyhound 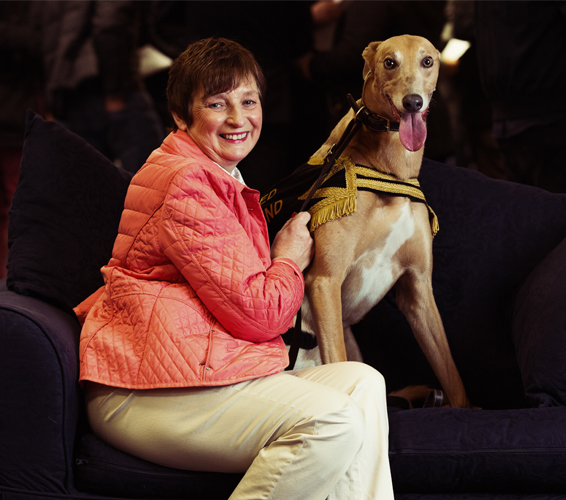 Ted is a retired Irish greyhound who is 7 years old, he raced until he was 3 and now lives a life of leisure with his owner Brenda. He is an ambassador for Greyhound Racing Ireland and had the honour of leading out the finalist of the 2018  & 2019 Irish Greyhound Derby at Shelbourne Park Greyhound Stadium.

Irish greyhounds are in Brenda’s blood, her uncle and mother were involved with greyhounds since the 1930’s. Brenda’s family used to breed, sell and race greyhounds and had success in various places including the old track in Navan, in Dundalk and also Harold’s Cross.

Ted first came to live with Brenda when he was just 3 months old and during his racing career, he had won a number of races in grounds such as Harold’s Cross and Shelbourne Park Greyhound Stadiums.

As a retired Irish greyhound, Ted’s life is very different and is one that most humans would be jealous of! A lot of people don’t know that these dogs don't actually need a lot of exercise and given the chance they would sleep the day away.

After a walk early in the morning, Ted returns home to a hearty breakfast of weetabix soaked in lovely warm milk and a spoonful of yogurt.  After he eats he takes himself off to the sofa where he sleeps for most of the day, before its time for dinner. As a retired greyhound, one of the things that Ted does is go to Shelbourne ground where he takes part in meet and greets. This is where members of the public have the chance to get up close and personal with retired greyhounds, and the greyhounds get the chance to show a side of themselves that people don’t often get the chance to see. Despite the image that people have regarding these dogs, they are actually exceptionally friendly and docile and Ted loves the chance to meet people and be petted and cooed over.

On a normal day, Ted sleeps after breakfast until it's time for his tea at 5pm, however on a day where Ted is going to a meet and greet he knows where he is going because around 2pm he gets some lunch, which is out of the ordinary, and is the signal to him that he is going out to the track and he gets really excited.